Bicycles are a 19th century invention, and “bicycle crazes” surfaced periodically, beginning in 1819, then again in1868 (in England and France), but the bicycle craze hit the United States in the last two decades of the century. Bicycles were everywhere in late 19th century American cities; cycling clubs were formed in major cities and small towns alike. An 1895 article in the New York Tribue even made the hyperbolic declaration that the bicycle was “of more importance to mankind than all the victories and defeats of Napoleon, with the First and Second Punic Wars” (quoted in Spreng 269). Bicycling was a regular topic in newspapers, even in relatively sparsely-populated areas like Minnesota and North Dakota. However, there was a lot of controversy about bicycles in the 1880s and 1890s; many of the articles were letters to the editor, complaining about bicyclists riding on sidewalks or riding too fast, but the most scandalous of all bicycle-related news was women cyclists. 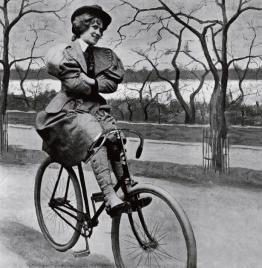 Part of the controversy was the bicycling costume, pictured above, especially women wearing bloomers. Several letters in daily newspapers from the Fergus Falls Daily Journal, for instance, express horror at the immodesty of female bicyclists. Bloomers first appeared in the 1850s, but had always had a bad reputation due to their drastic departure from the socially accepted and extremely cumbersome women’s fashions of the time. The short, baggy trousers revealed women’s legs, which was very taboo and was considered by many to be outright risque and indecent. The cycling costume also blurred gender lines, allowing women to wear traditionally masculine clothing. Bloomers and bicycles were very closely related to the New Woman and her defiance of traditional gender roles, to the point that cycling and cycling costume were symbols of late 19th century feminism. For instance, the Grand Forks Herald described “bloomers,” a nickname for female bicyclists, as “women who stood on their rights” (quoted in Spreng 272). And when Cambridge University first granted full admission to women in 1897, male undergraduates protested by hanging an effigy of a woman on a bicycle.

Cycling was also a sort of literary hallmark for a New Woman character. In Grant Allen’s novel The Type-Writer Girl, the main character Juliet is a prototypical New Woman figure; she is educated, employed, she rides a bicycle and has a keen sense of adventure. She opens the narrative musing on the theory that the Odyssey was written by a woman, and she declares, “I will go forth into the world in search of adventures” (Allen 11, 12). For Juliet, exploration, mobility, and employment are essential components of freedom, although, predictably, she longs for romance as well. She observes that “the nineteenth century has a chivalry all its own, which I scruple to depreciate. If it speaks of us as females, it has given us the bicycle, and it almost admits that we are as fit for the franchise as the forty-shilling lodger… That I call magnanimity” (Allen 16). The 19th century has given women the somewhat cold and clinical label “female,” thus erasing the romantic “lady,” but in return it has given these females greater freedom, epitomized by the bicycle. Juliet later describes her love of bicycling:

How light and free I felt! When man first set woman on two wheels with a set of pedals, did he know, I wonder, that he had rent the veil of the harem in twain? … A woman on a bicycle has all the world before her where to choose; she can go where she will, no man hindering (Allen 43-44).

Grant Allen’s protagonist is not alone in this association between bicycling and women’s freedom. Susan B. Anthony praised the bicylce as a vehicle of feminism: “Let me tell you what I think of bicycling. I think it has done more to emancipate women than anything else in the world. It gives women a feeling of freedom and self-reliance. I stand and rejoice every time I see a woman ride by on a wheel…the picture of free, untrammeled womanhood.” The bicycle itself and the less-restrictive clothing worn to operate it were symbols of women casting off patriarchal constraints; freed from the heavy skirts and layers of structured underclothing, “bloomers” could go where they pleased. As The Type-Writer Girl demonstrates, the bicycle was closely related to women’s freedom through independent employment; these New Women often used their bicycles for recreation and transportation to and from their places of employment. The bicycle is a liminal vehicle, allowing a woman to traverse the landscape between the domestic and public spheres, using her own will and physical power.